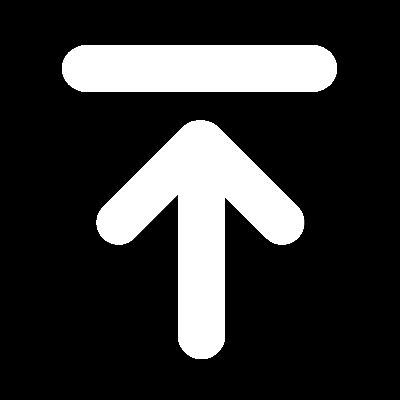 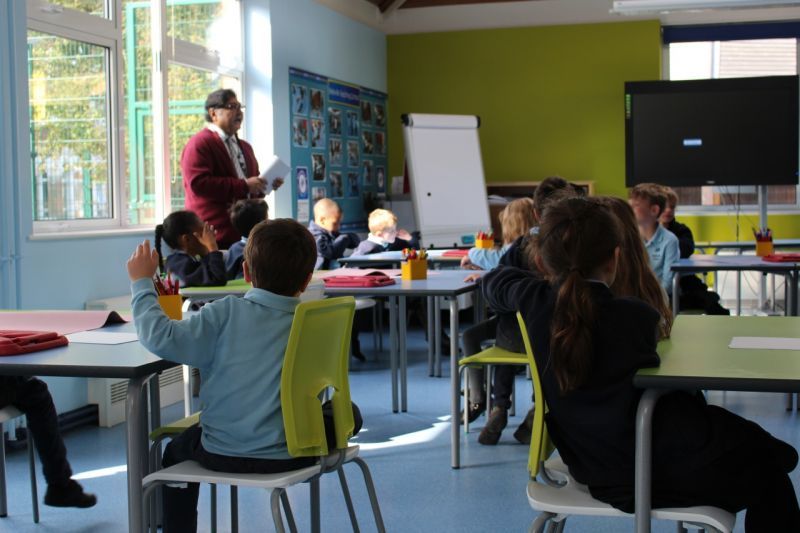 On Monday the 12th of October, Professor Sugata Mitra made his third visit to Belleville Primary School, based in Clapham, London. The school has two sites, and we were fortunate to have Sugata lead Self Organised Learning Environments at both sites to three classes in Years 5, 4 and 3.

Sugata’s work on Monday is what I would describe as a ‘pure SOLE’. By ‘pure SOLE’ I mean one with an open question, not one restricted to a specific class, topic or theme. It was also pure in the sense that the adults did not participate or even tour round the classroom. At Belleville we try to keep our SOLEs pure, our questions, however, relate to the topic or theme that is currently being covered by the class. They are usually done at the beginning or the end of a topic or unit of work.

The first SOLE took place in Year 5. As all of our participating classes are made up of around 30 pupils, each class had 8 or 9 iPads between them. A number of our teaching staff had come in to observe a SOLE lead by Sugata himself and we were also joined by 9 external visitors who were nearly all Headteachers from various schools Belleville has links with. On average there were around 20 observers in each SOLE. The children organised themselves into groups and most groups were made up of 3 or 4, but the children had the option to change groups at any time. The first two SOLEs took place in our ‘Thinking Space’ at our larger Webb’s Road site, this room allowed for fluidity of movement between the groups.

Having so many adults observing the children could potentially change the dynamic of the SOLE, however, the children remained unfazed throughout. At Belleville we have multiple visitors and therefore the children are used to being observed. I introduced Sugata and told the children to imagine the observing adults were invisible, and in turn, the adults were not allowed to speak to the pupils during the hour. For each SOLE, Sugata chose an ‘Assistant Professor’, choosing to use this terminology as an alternative to ‘Policeman’. After a small election which each time resulted in a bit of a hung parliament, the class were in agreement as to who the Assistant Professor would be. In all 3 SOLEs throughout the day, the Assistant Professors all did an excellent job and took the role very seriously. By using a voting system the pupils were happy with who they had chosen and therefore keen to listen to them.

To begin with the children were slightly uncertain in their ability to answer an A-Level or GCSE question. One pupil in Year 4 said: “We could get it right or we could get it wrong.” Once Sugata had asked the class if they thought they could come up with an answer if they were able to use the internet, the same pupil replied: “Well then we’d probably be able to answer it.” 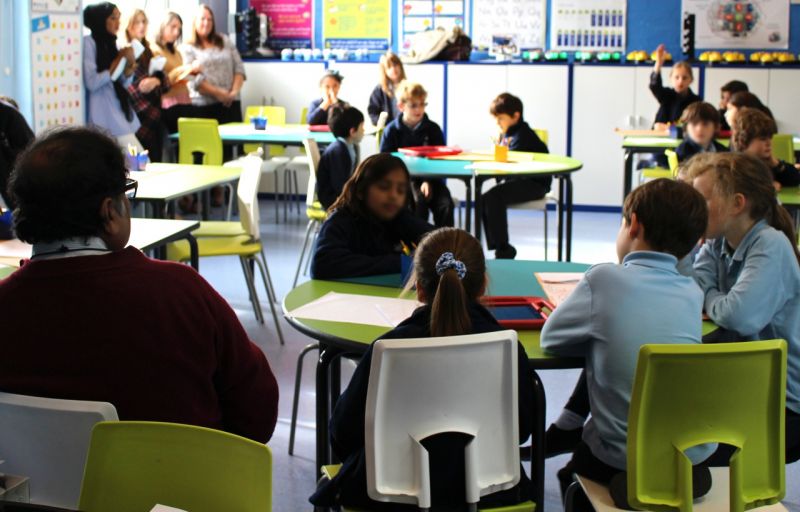 ‘A 15-year-old boy has inherited a disease called cystic fibrosis and he suffers from frequent chest infections. A hospital consultant suggests that he would benefit from a heart and lung transplant, as soon as suitable organs become available.

Suggest two pieces of information that the consultant should give the boy and the boy’s parents before they agree to the surgery.’

A few minutes in and it had started to become apparent that the children were already well on their way to reaching an answer. One girl told her group: “There is no cure for Cystic Fibrosis, but you can use antibiotics to treat it.” Another group began to discuss the dangers of surgery and what they might tell the boy’s parents about it.

Once the Assistant Professor had announced that time was up, the children took turns to present from their tables using posters they had created. In Year 5, some groups focused heavily on the medical descriptions, and spoke about Cystic Fibrosis being an inherited disease, while others followed the question through past the definitions and recommended that the consultant should encourage the boy to have a heart and lung transplant, but they would need to wait until a transplant heart and lung became available. Once all groups had presented, Sugata told the Year 5’s that they were able to answer an A-Level question 9 years ahead of their time and would probably receive full marks if it was the actual exam! Needless to say our pupils were very proud of themselves.

‘A team of wildlife experts were looking for traces of a rare animal in the hills of Wales. The weather was unpredictable and when it began to rain and became very cold they looked for shelter. They spent the night in a cave and the body temperature of each member of the team began to fall.

c)              Other than control of body temperature, give one other example of a physiological process that is regulated by homeostasis.’

It was interesting that Sugata chose a three part question for the Year 4 pupils (would they need more time to answer all three questions?) and one arguably harder than the question selected for Year 5. Despite this, during the presentations every group indeed managed to answer all 3 questions, explaining in detail what homeostasis is and giving examples of other physiological processes. One group explained that homeostasis also “Stops stress and reacting badly” as well as regulating the body temperature. Another group mentioned the link between physiological and psychological, which Sugata found particularly impressive. 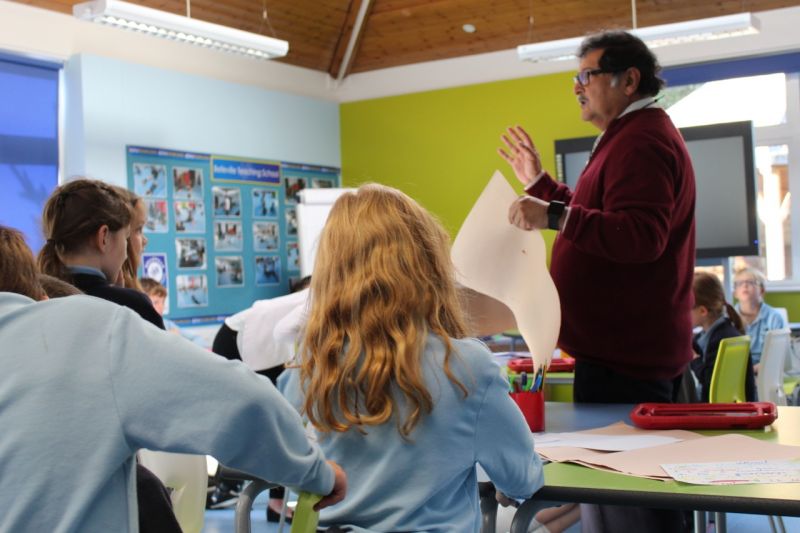 Several of the group’s first port of call was to search the question into Google images, and a lot of the children discovered that vaccinations are administered in syringes through this. During the Year 3 presentations, the children explained that vaccinations were used to prevent diseases. One group explained that a “Vaccination is a medicine you put in a syringe. It is used to stop diseases and take germs away.” After all groups had presented, Sugata asked the children if they thought they could summarise what they had learnt. At this point one child said they did not know that there was an ‘immune system’ but they had heard of the word ‘immune’. It was evident that the children were also beginning to broaden their vocabulary as well expanding their knowledge.

Sugata wanted to see if primary school children could stretch their ability to answer questions up to 9 years ahead of their time with the use of the internet and the ability to talk to each other. Following each SOLE, the observing staff and visitors were all in agreement that the children's capability to tackle such advanced questions and reach the correct answer each time was extraordinary.

After the presentations in one of the SOLEs, Sugata asked the class to think about why they need to wait until secondary school or college to answer questions they have the scope to answer now.  He told them to think about what could possibly happen 9 years from now – could they be allowed to use the internet in their GCSE and A-Level exams? Sugata left the children to ponder by telling them, “You might be able to access the internet with a tablet, or maybe by then it’ll be your watch, or your glasses! That future is coming soon.”

After the SOLEs, Sugata met with over 20 teachers to discuss the day which was incredibly valuable as the teachers had the opportunity to fire questions and in turn Sugata provided his insight, experiences and knowledge on his SOLE approach. One teacher asked what to do if they were doing a SOLE and the children just couldn’t reach an answer to which Sugata said that he would go back to the wording of the question, as that is probably where the fault lies. He reflected back to the SOLE earlier in Year 3 and how the children struggled to pronounce the world ‘vaccination’. He told the group that it is helpful if the children find out the meaning of the words before answering the question.

The conversation was widespread and as well as including reflections of the SOLEs that took place throughout the day, there was also discussion on SOLEs with adults (Sugata once conducted a SOLE with just Headteachers!) and an international SOLE that took place in New Jersey and Ghana at the same time where the question was, “Why is the Blue Whale the biggest mammal?”. Sugata also talked about the education system being reluctant to adapt to change and told the group that if a Victorian somehow had the means to travel in time to the future, they would be shocked as to why our education system is still the same. There are exam questions you might think are completely irrelevant that would have some point in the past been extremely relevant to the people of that time. Sugata gave the example of river bank erosion, saying, “If I have to learn about river bank erosion for an exam, why don’t I ask why river bank erosion was so important to people?”

To conclude the discussion and a valuable day of learning, Sugata concluded with a quote from Einstein which he believes should be on the walls of every school;

If you’d like to read Mr Grove’s blog of the day’s events, you can do so on the School in the Cloud website.